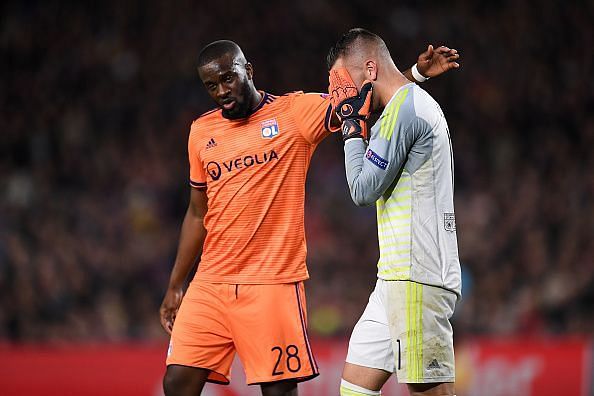 Barcelona cruised into the UCL quarter-finals after a 5-1 home win vs. a spirited Lyon side. Which players struggled while others excelled?

Lionel Messi scored two goals and created two more as Barcelona earned a 5-1 win against a plucky Lyon side at the Nou Camp, sealing their place in the Champions League quarter-finals where they are Spain’s only remaining representative among Europe’s elite at this stage of the competition for the first time since 2009/10.

If not for the visitors’ goalkeeper Anthony Lopes and his quick reactions in dangerous situations, Barca would have raced into a three-goal lead after just 15 minutes. Jason Denayer’s needless tackle attempt on Luis Suarez saw the La Liga champions awarded a spot-kick, from which Messi made no mistake to break the deadlock.

Philippe Coutinho doubled their lead after great unselfish play by Suarez himself, before Lopes – clearly concussed – made way tearfully after the half-hour mark for Mathieu Gorgelin, to make his Champions League debut.

Goals from Messi, Gerard Pique and substitute Ousmane Dembele helped put the icing on the cake, shortly after Lucas Tousart’s first Champions League goal gave Lyon a lifeline at 2-1 down with 30 minutes still to play. With all of that in mind, here’s a look at five hits and flops from a memorable evening in Spain: 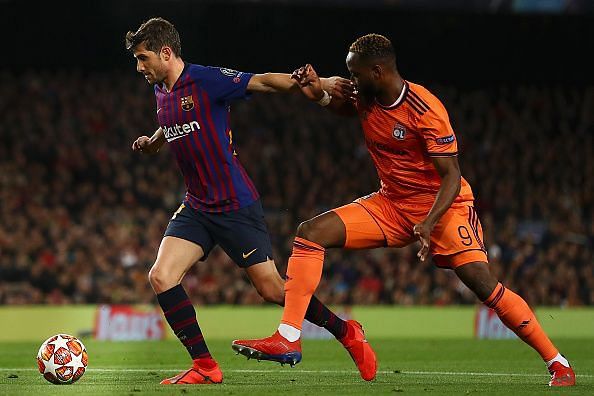 Perhaps harsh on the Frenchman, this was a largely quiet and uninspiring showing from the forward – who is hungry for opportunities like these centre-stage. Barcelona away, in a crunch Champions League tie, the 22-year-old went out with a whimper and was effectively thwarted by Clement Lenglet and the rest of Barca’s backline.

Despite Lyon adopting a defensive 5-3-2 formation, they posed threats on the counter-attack and the Dembele-Depay pairing in attack was supposed to provide them with targets to hit in-and-around Barca’s box. Although the Dutchman was replaced after 72 minutes, Dembele had the better chances and failed to make the most of them with the ball in his possession.

The fact he was dispossessed on six occasions, despite having a game-low 30 touches, speaks volumes. Lenglet’s excellently-timed block midway through the first-half saw Dembele’s effort flash narrowly wide of Marc-Andre ter Stegen’s far post, which was a timely reminder that Lyon could score on the break themselves.

He was visibly frustrated as time wore on and particularly with a deficit to overturn, tried his utmost to create things but often ran himself into traffic or just chose poor decisions near the final third. The fact he registered the same amount of shots (3) as fouls committed throughout says it all. Disappointing. 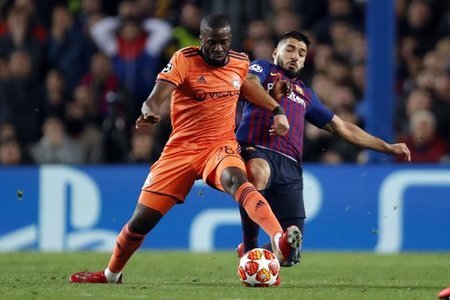 Lyon lost 5-1 and whenever you suffer a heavy defeat, rarely do players come out of the game with much credit. Under the bright lights at the Camp Nou though, Tanguy Ndombele did precisely that – everywhere across the pitch and proved a real nuisance from minute one to stifle Barca in central midfield.

Four tackles, three interceptions and numerous ball recoveries, the 22-year-old never stopped running and always looked to get on the ball where possible too. Intelligent and composed in possession, strong and agile enough to outmuscle challenges – a powerful runner with delicate poise and great defensive positioning to match.

96 touches is a type of stat you’d expect from say, a Barcelona player, so it’s unsurprising that he registered a game-high in that category. 91.8% pass accuracy, three completed dribbles and fouled three times too?

With 90,000 in attendance and a number of interested suitors across Europe watching on, he shone as part of a spirited Lyon showing despite the scoreline. Performances like these are only going to see his transfer value continue to increase amid reports this will be his last season in France’s top tier. 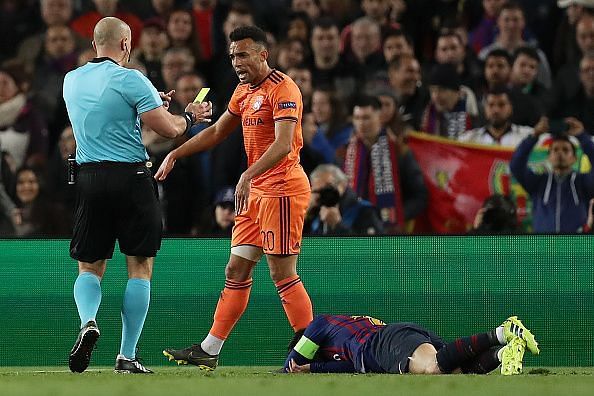 Marcal was clumsy and despite a recovery clearance in the second-half, largely disappointing

Lyon conceded five on this occasion, after a hard-fought clean sheet three weeks ago, so it’d be easy for me to pick out Jason Denayer – who gave away the penalty early on – as the visitors’ chief flop.

Instead though, the Belgian recovered well from his needless mistake and despite being kept busy, dealt with danger just as he did in the first leg. Instead, it was actually the performance of experienced defender Marcal which stuck out for all the wrong reasons throughout. Other than a recovery clearance to deny Messi what would have been his hat-trick, the 30-year-old was poor and shaky.

The only starting centre-back for either side not to register a completed tackle, he made three interceptions, one clearance and block – but committed two fouls, got booked just after the half-hour mark and thus was playing on a tightrope for nearly an hour.

Often caught ball-watching or in the wrong position at the wrong time, he struggled for composure and it allowed Barca’s frontline to target spaces in-behind him. While Denayer rose after his mistake, Marcal looked vulnerable and knew he couldn’t make another poorly-timed challenge if he wanted to avoid a sending off. 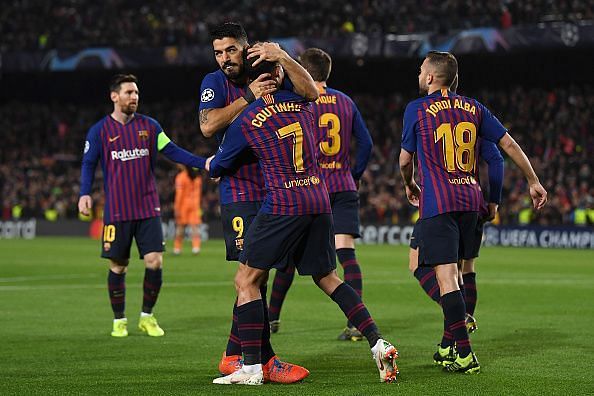 The fact that Luis Suarez only has one solitary assist and no goals to his name, yet features so highly on this list, emphasises the Uruguayan’s excellence in the final third. He created a game-high four key passes and was always looking for teammates in space, namely Messi and Coutinho – for whom he teed up to double Barca’s lead.

Before that, he won the spot-kick and although you could debate whether he or Denayer initiated the contact, the Belgian should’ve known better than to attempt a tackle like that in the box. Suarez sensed the danger and seized his opportunity as he so often does.

Arthur’s piercing pass into Suarez still left him a lot to do, as he took a brilliant touch to control and advance beyond two Lyon defenders before unselfishly squaring across goal for Coutinho, who has been struggling for consistent form this term.

If not for some early saves from Lopes and a more selfish approach in the final third, Suarez could have conceivably had a hat-trick himself. But as he’s maturing, he’s becoming less of that player and more accommodating – which proved beneficial in this one. Two tackles, three completed dribbles, fouled on four occasions. A nuisance as always, even if he’s not scoring goals for fun. 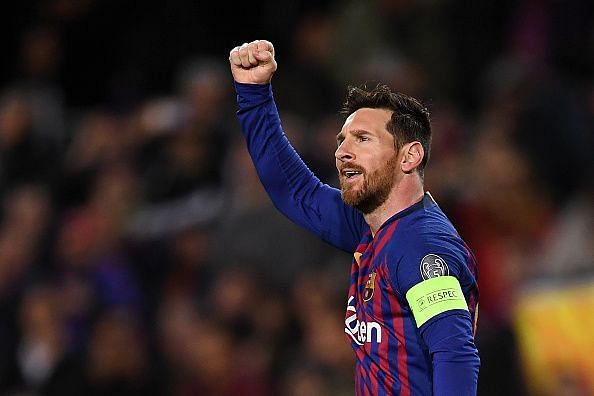 Who else but Messi? After Cristiano Ronaldo’s heroics on Tuesday night, it was Messi’s turn to shine and he relished the challenge – as he always does – to lead Barcelona to a thumping victory.

He combined well with Suarez and Coutinho all evening long, while the same could be said for substitute Ousmane Dembele when he was introduced. Even though his shot selection and decision-making weren’t at their razor-sharp best, the magician was unfazed: continuing to stretch Lyon’s backline and either forcing them to foul him or gliding beyond them into the final third.

Whether it was driving forward in possession, intelligent attacking movement, a Panenka under pressure to break the deadlock, Messi excelled when he was needed most. He could’ve had more goals too, if not for Lopes and then substitute Gorgelin denying him at crucial moments to keep the score at 2-0. He saw a deft chip cleared off the line by Marcal, came close twice before Lopes trudged off and again afterwards in an action-packed game for the Argentine.

Turning creator in style, his weight of pass was inch-perfect and allowed both Pique and Dembele to latch onto at the far post to devastating effect. Two goals, two assists, three key passes and rightly the Man of the Match – a joy to watch in games like these.