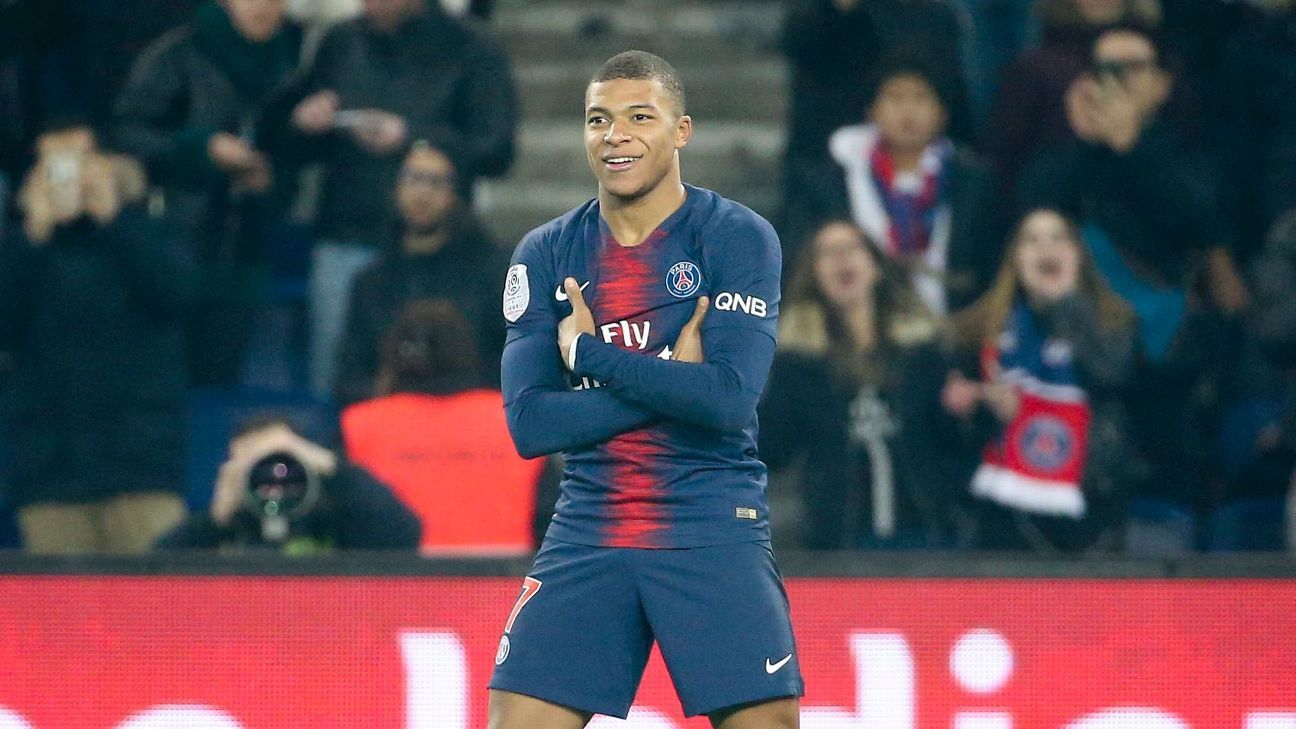 Having celebrated his 20th birthday on Thursday, Kylian Mbappé finished 2018 with yet another goal during PSG’s 1-0 home win over Nantes this evening. END_OF_DOCUMENT_TOKEN_TO_BE_REPLACED

PSG creative midfielder Julian Draxler is being held back by fierce competition for places with the Ligue 1 champions, and has yet to reach his full potential.

END_OF_DOCUMENT_TOKEN_TO_BE_REPLACED 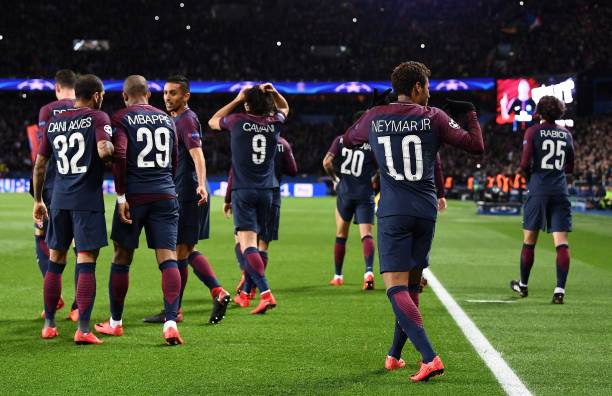 Neymar and Edinson Cavani both netted two while Kylian Mbappé impressed too as PSG demolished Celtic to break Champions League records and finish as Group B winners with one matchday fixture still to come.   END_OF_DOCUMENT_TOKEN_TO_BE_REPLACED

Paris Saint-Germain returned to the top of Ligue 1 in style on Sunday evening, with a 6-2 thrashing of Toulouse. Neymar was influential on his home debut for Unai Emery’s men, who’ll be quietly hoping this is the start of something special in Paris this season.

END_OF_DOCUMENT_TOKEN_TO_BE_REPLACED

As previously reported, VfL Wolfsburg’s creative midfielder Julian Draxler is expected to leave the club in the coming months if his agent is to be believed. Read on to find out why arsenal should be on red alert for the german’s signature.

END_OF_DOCUMENT_TOKEN_TO_BE_REPLACED 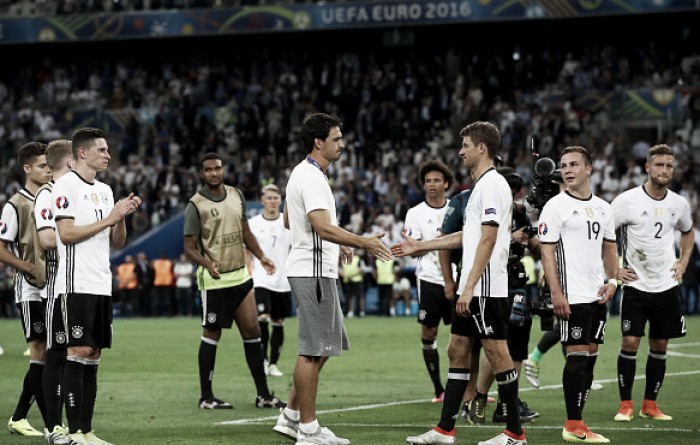 They were tactically outdone by a France side spearheaded by a brilliant Antoine Griezmann – who seemed to embrace the pressure, as opposed to crumble underneath it.

END_OF_DOCUMENT_TOKEN_TO_BE_REPLACED

Julian Draxler, fresh off the substitutes’ bench, scored with a close-range effort to help give Dieter Hecking‘s men maximum points from a match they probably should have lost in truth, at the Volkswagen Arena.

In a cagey affair packed with half-chances for both sides, it should have been Bayer Leverkusen in-front, but they struggled to convert their chances and fell behind shortly after the half-hour mark, courtesy of an extraordinary moment of controversy.

Nicklas Bendtner slammed home from a few yards out, but his reaction after hitting the back of the net spoke volumes about the goal itself. Not only was it against the run of play, but Vieirinha, credited with the assist, was in an offside position when the ball was played into his path.

The officials waved play on despite replays showing André Schurrle passed the ball into his feet – as opposed to the Leverkusen defender – and after he drilled the ball low into the former Arsenal man’s path, he simply couldn’t miss.

The visitors got their deserved goal soon afterwards, with Mexican forward Javier Hernandez peeling away from Naldo within a flash in the area before expertly heading his effort past Diego Benaglio to level proceedings from a teasing ball by Christoph Kramer. His sixth goal in four matches, Chicharito has certainly been in amongst the goals recently since his summer switch from Louis van Gaal‘s Manchester United.

The final few minutes of the first-half were action-packed and end-to-end, and Benaglio made a great stop to deny Admir Mehmedi‘s one-on-one opportunity with just seconds until the interval.

As the second 45 began, neither side made any alterations. Papadopoulous made an important block to deny VfL Wolfsburg from taking the lead once more, and you could tell what it meant to the young Greek defender – as he celebrated passionately to the supporters behind the goal.

Schurrle squandered a golden opportunity to put the game to bed, curling his effort narrowly over the crossbar, whilst the hosts had two penalty decisions correctly turned down by the referee Manuel Graefe, who had a tough test having to keep up with the action at times.

With little over fifteen minutes to play, and the scores still somehow level, Hecking made a double alteration. Draxler and Dutch forward Bas Dost were introduced into the fray, in place of Maximilian Arnold and the ineffective Nicklas Bendtner – who, apart from his goal, was quite frustrating in-front of goal and should have done more, in truth.

Just minutes afterwards, Wolfsburg celebrated as Draxler made it two-one, and Leverkusen were staring defeat in the face again. Wendell, Karim Bellarabi and Kevin Kampl tried their luck – to no avail, as Benaglio was alert to their efforts and ensured he didn’t concede more.

The goal itself, is certainly going to be one that Bernd Leno will not want to see again. Ricardo Rodriguez took a pop from range, and although it bounced in-front of him, the goalkeeper parried it into a dangerous position yards away from his near post. Dost was on hand to flick the ball back goalwards, and Draxler was first to the ball, tapping home from close-range.

Should Wolfsburg had won? Probably not. Did they? Yes. Fine margins in football, triumph once more.

Both sides have respective Champions League fixtures in midweek – Wolfsburg travel to the Netherlands for a tough test against PSV Eindhoven; who they beat in matchday three of the group stages. Roma entertain Leverkusen on Wednesday meanwhile, with Roger Schmidt‘s side sitting second in their group, behind the competition’s holders Barcelona.

Schalke’s 19-year-old attacking midfielder Max Meyer is gradually becoming one of Germany’s brightest young prospects, and a prized asset at Schalke. Certainly one to watch under Roberto di Matteo alongside the likes of Draxler and Goretzka; read below for more.

Maximilian Meyer, a 19-year-old attacking midfielder who currently plays his football in the Bundesliga with FC Schalke, is certainly a youngster with a lot of talent, potential and one to look for years to come. He burst onto the scene in German football two seasons ago, taking advantage of his chance when it came as a result of numerous injuries; with a vulnerable Schalke midfield on display, he shone under pressure and has established himself as a player with world-class potential.

He was born in Germany on 19th September 1995 and joined Schalke’s youth ranks in 2009, before making his professional debut for the club in the Bundesliga and Champions League competitions in the 2012-13 season.

He was very successful with the Schalke U-19 side, winning the U-19 championship against rivals Bayern Munich in their final game, having featured in 15 matches – scoring 11 and creating 11 assists in the process. As a result of his impressive performances, he was rewarded with a professional contract up until the 2015 season, and there were glimpses within his play to suggest that he would settle in perfectly with the first-team set-up at the club.

Meyer has played 59 matches for the first-team, scoring 7 goals and creating 5 assists in over 3,300 minutes of football. It may not seem like much, but in his bit-part spell he has been able to impose himself upon the squad and impress other clubs across Europe with his confidence and technical ability at such a young age.

Last year, he signed a contract extension with the club until June of 2018, virtually sealing his immediate future with the side that had promoted him to a professional level; he currently wears the number 7 jersey and he has forced his way into being looked at for a potential spot in the World Cup winners squad.

Meyer has been involved for both club and country since a young age, he featured as part of their U-17 squad in the U-17 championships, which Germany lost in a penalty shoot-out in the final. He was awarded the best player of the tournament, and has gradually moved up in the national team ranks from U-17, to U-19 and was named in the 30-man provisional squad for the World Cup.

He made his debut for the German senior national side in a 0-0 draw against Poland, albeit in a friendly at the end of last season – but this could easily be a sign of things to come over the upcoming years given the amount of opportunities on-show.

STYLE OF PLAY AND COMPARISONS TO MESSI:

Meyer himself is predominately a attacking midfielder, who can play at in a deeper role and his playing style has already raised comparisons to the likes of Argentine maestro Lionel Messi, who is easily one of the best players ever to grace a football pitch. Although it would be unfair to compare the two, you can see why Meyer has been dubbed the “German Messi”, because of his dribbling skills and fast-paced speed alone are two attributes hard-to-find. His technique is superb, also.

With youngsters emerging at Schalke, such as Draxler, Kolasinac and Goretzka – it’s not hard to see why Meyer has the potential to flourish with these types of young players alongside him.